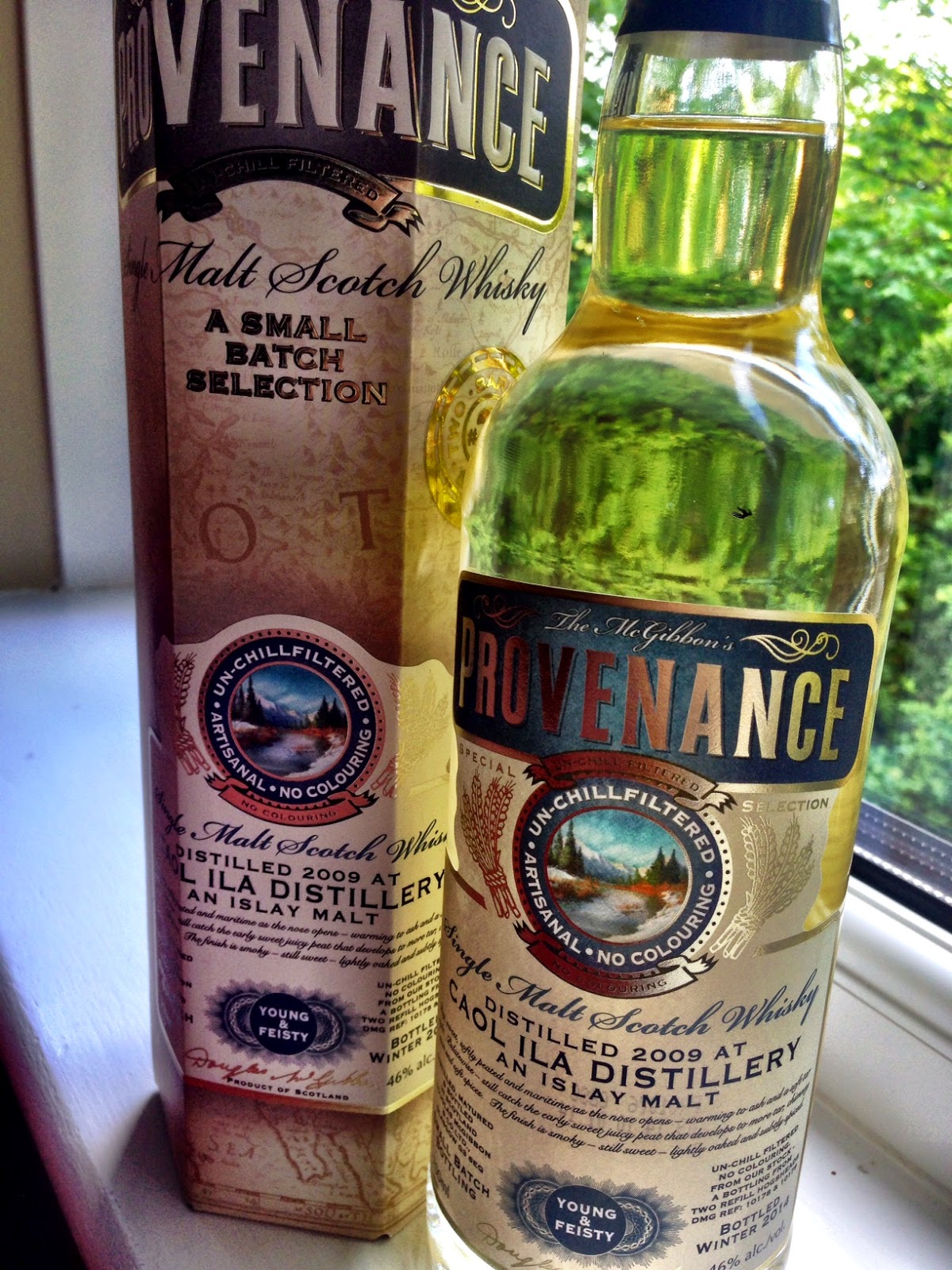 I've become something of a fan of Caol Ila over the last 12 months since receiving a bottle of the Cask Strength as a present last Christmas. And although my tasting notes on the distillery's produce are scarce, much more is to come, including a couple of SMWS beauties.
This particular Caol Ila caught my eye at this year's Edinburgh Stramash. I was intrigued by its 'Young and Feisty' tag and having consumed my fair share of young - and quite fabulous - Kilchomans recently, I asked the folks at the Douglas Laing stand for a drop. I loved it immediately and upon my return to Glasgow, I purchased a bottle as soon as I had the cash. Young it might be, but it's full-flavoured, is unchill filtered and has no added colouring.
As always with a full bottle, I don't review it until I'm at least half-way down the bottle to see how it fares as time passes. In we go!
On the nose I'm immediately stuck by how creamy this whisky is. It's also packed with black liquorice, treacle, damp leaves and earthy peat. There are some zinging citrus notes dancing around, too which cuts through the earthy notes and actually sweetens it slightly. Vanilla arrives after 10 minutes along with smashed gooseberries, a square of white chocolate, fresh mint leaves, white pepper and banana. There's even a hint of grassy manure lurking around - and reminded me of walking past the elephant enclosure at the zoo when I was a lad. But hang on! Rather than being unpleasant, it actually tied in with the other scents and is quite lovely. What is happening to me?
On the palate, complex citrus notes coat the tongue before a blanket of sweet peat shoves them aside and makes itself comfortable. There's also damp embers, ash, more white chocolate, bonfire smoke, bananas and cough sweets. It also has that lovely Caol Ila light freshness going on.
The finish was medium to short and carried a slight off the still note. However, there was also tar, wet hay, smoke, slight vanilla, a sliver of wood, instant coffee granules, menthol cough sweets and a shake of smoked paprika.
An interesting and strangely refreshing dram. Definitely glad I bought a bottle.
46% Caol Ila Douglas Laing five years old Islay no added colouring non-chill filtered peat peated Scotland single malt whisky Young And Feisty

Friday, August 31, 2018 Our last full day on Islay, so it was time to scoot around a few places we had yet to visit on this trip. While independent bottler Hunter Laing’s Ardnahoe distillery - which is situated on the road to Bunnahabhain - is still coming together, they've opened a visitor centre for whisky nuts like myself to learn a bit more about their future plans. The centre isn’t on the distillery site and can currently be found not far from the Bridgend Hotel at Islay House Square . It’s right beside Islay Ales and a couple of galleries, although once Ardnahoe is up and running, the centre and shop will likely relocate to the distillery itself. It’s well worth a visit if you’re on Islay as not only will the friendly and knowledgeable staff tell you everything you need to know about Ardnahoe, but they stock a great selection of drams from the Hunter Laing range. And it’s not just limited to whisky, the company’s Kill Devil rums are also for sale,