Make mine a double - Longrow 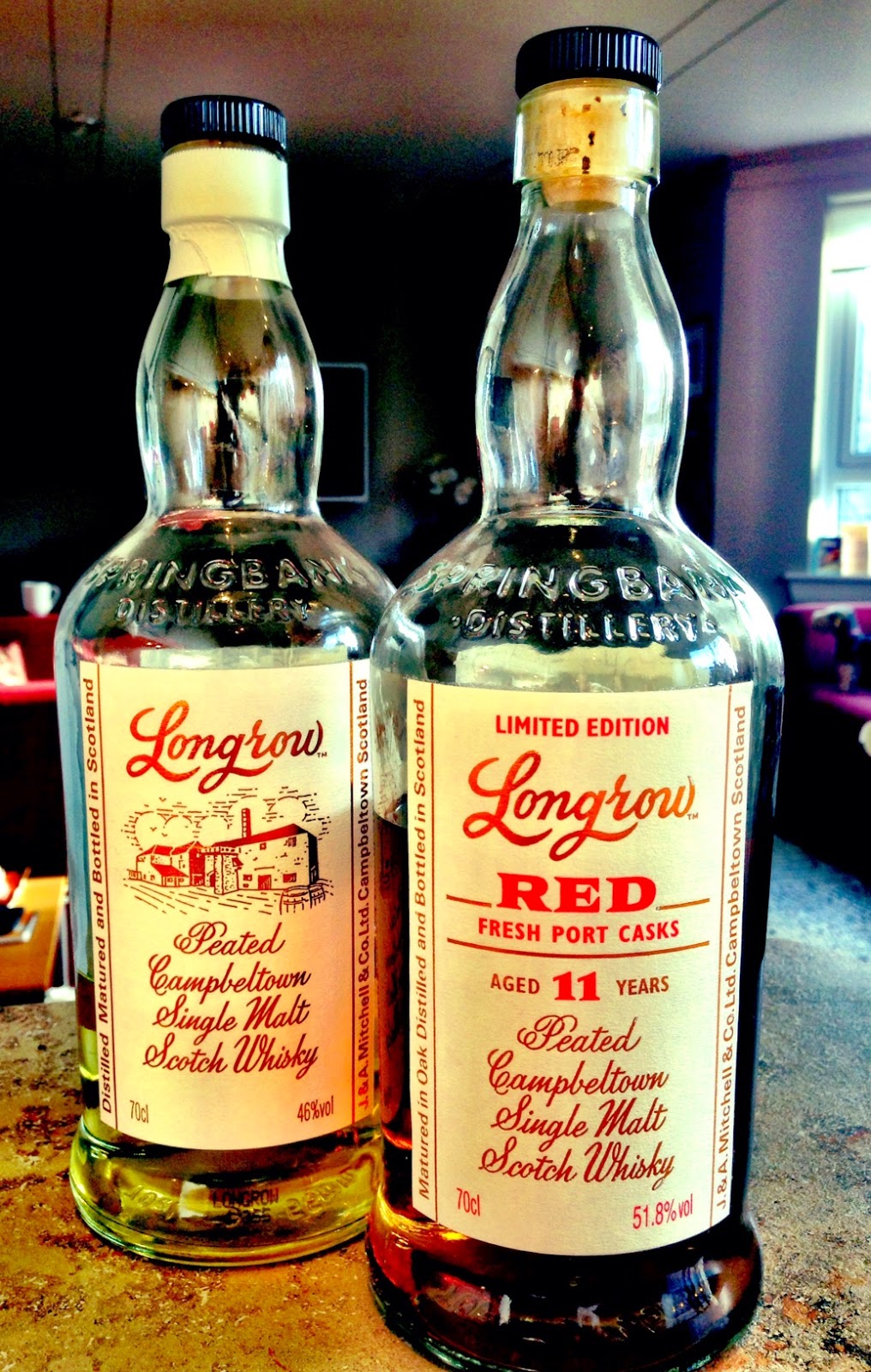 Late last year, I picked up a bottle of the latest limited-edition release from Longrow - the Red 11-year-old Port Cask. Not long after, I picked up a bottle of their Longrow Peated - a recent bottling to replace the Longrow CV which has shuffled off to the great big bottle bank in the sky.
So rather than review them separately, I thought I'd put them side-by-side and get my notes down. Both are from Springbank, both are non-chill filtered, both have no added colouring and both are excellent. Read on!

I immediately got mineral peat wrapped in sweet honey. There's also clean barley notes and chunks of vanilla Edinburgh rock. In fact, despite the ever present peat, this is a dram with a lot of vanilla. After a few minutes in the glass, I got the scent of wood - a bit like sticking your nose into a big box of matches.
The Longrow Peated carries a hard, flinty edge but along with its angular character, it has a soft, fluffy centre - charred white marshmallows, a hint of sage and a paper bag full of sherbet lemons. A little water adds a bunch of citrus notes, a whiff of gentle tobacco and a touch of salt.
Take a sip, and the delivery is sweet and mouth-coating. There's loads of vanilla here again, but the earthy peat soon makes itself known and there's a taste which brings to mind chilli-covered twigs! The honey sweetness return, though, and coats the flavour of malty Cheerios breakfast cereal. A little water brings salted lemons to the party.
The finish is again packed with rich vanilla, while it's also slightly chalky with a little sour citrus. After a few sips, butterscotch-flavoured Werther's Originals come through. That drop of water adds an amazing tobacco taste but adds to the sourness. I think I prefer this one neat.

As soon as I took a sniff of this whisky - which has spent all 11 years in a port cask - I got sticky toffee pudding complete with plump raisins and rich toffee sauce. Wow! The peat is certainly there, but it's actually quite restrained and help push dark fruit to the front of the stage, specifically dates, prunes and cranberries. It's also got quite a heavy menthol thing going on which reminds me of Tunes cough sweets (can you still get those?)
A baked orange notes lurks around the edges and after a few minutes, ham-marinated in cola comes through. I also get a slight putty smell. Water lightens the whole dram, bringing with it an increase in that orange note and adds a little tangerine to the mix. Bear with me here, but the smell with water reminds me of Pimm's with a drop of grenadine.
Tasting this neat, I found it quite astringent and closed up. It's unmistakably sweet with a jammy, peaty edge. Water is most definitely your friend with this whisky and it opens the whisky up revealing even more red, jammy fruits and seems to intensify the peat. I also get a flat Irn-Bru taste which I always find in distillery bottlings of Bowmore.
The finish is smoky and sweet and made my mouth water. It carries a fair whack of cinnamon spice and there are heavy tannins at work here, too. Water brings raspberry jam , buckets of smoky vanilla and then disappears leaving a hint of pomegranate, cranberry and orange rind.
46% 51.8 Campbelltown limited-edition Longrow no added colouring non added colouring non-age statement peated port port cask review Scotland Springbank tasting notes

Friday, August 31, 2018 Our last full day on Islay, so it was time to scoot around a few places we had yet to visit on this trip. While independent bottler Hunter Laing’s Ardnahoe distillery - which is situated on the road to Bunnahabhain - is still coming together, they've opened a visitor centre for whisky nuts like myself to learn a bit more about their future plans. The centre isn’t on the distillery site and can currently be found not far from the Bridgend Hotel at Islay House Square . It’s right beside Islay Ales and a couple of galleries, although once Ardnahoe is up and running, the centre and shop will likely relocate to the distillery itself. It’s well worth a visit if you’re on Islay as not only will the friendly and knowledgeable staff tell you everything you need to know about Ardnahoe, but they stock a great selection of drams from the Hunter Laing range. And it’s not just limited to whisky, the company’s Kill Devil rums are also for sale,