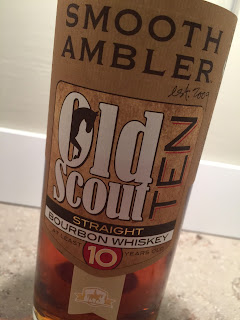 Yes. Another spirit from the US - and this time it’s the Smooth Ambler Old Scout 10 year old bourbon.
It’s from the West Virginia craft distillery and bottled at a very respectable 50%. Unlike my last review, this hugely enjoyable bourbon has a healthy shovelful of rye added to the mashbill which gives a lovely spicy character. It’s not the first Smooth Ambler I’ve tried – I tucked into a seven-year old version back in 2013.
Just for the record, this particular bottle is from Batch 16 and bottled on April 29, 2014.

Nose: Buttery cream-filled cannoli dusted with spicy ground cinnamon and icing sugar. The rye is definitely adding that edge of spice. There’s also black cherries mixed with a generous scoop of vanilla ice-cream (Having thoughts of creating a syrup with this bourbon and pouring it over ice-cream). A little nail-polish remover astringency makes itself known, but it’s softened by golden syrup, a drizzle of honey, mint and good old-fashioned Scottish tablet.

Palate: A sweet arrival which remains sweet right the way through. The rye adds green spice, which sits just underneath honey, apple and caramel notes. It’s rich and mouth coating, with more mint and a teaspoon of cough medicine.